Map of the Trees
Litchfield Garden Club Enhances Borough Treescape
​
In September 2017, the Litchfield Garden Club’s (LGC) Civic Beautification & Projects Committee, co-chaired by Jane Hinkel and MaryAnne McNeill, began planning to expand the treescape in the Borough of Litchfield. A major undertaking, the scope of the project involved extending the tree canopy on East and West Streets using mature trees of significant size.

A project of this magnitude requires significant funding. In October 2017, a grant application in the amount of $50,000 was submitted to the Scherr-Thoss Foundation, with the LGC pledging an additional $4000 from the Civic Fund. The grant application was approved and funding received in December 2017.

Included in the proposal were two bids secured from local contractors. Both vendors toured the area and offered suggestions for possible planting sites and tree species. After meetings with the Litchfield Town Engineer and Department of Public Works, Kent Greenhouse in Kent Connecticut was chosen for the project.

Throughout the winter of 2017-18, site visits by Kent Greenhouse resulted in 25 possible locations for tree plantings. In March 2018, the State of Connecticut Tree Warden along with the Landscape Designer at the Connecticut Department of Transportation reviewed the proposed sites and species. Approval was granted for the planting of sixteen trees on fifteen sites.

The final step in the process was approaching the contiguous homeowners for approval as required by State of Connecticut. Once granted, tree installation began in mid-June 2018. With seasonal care consisting of weekly watering, weed-free wells, fertilizing and mulch touchup, the trees will be deemed established and the cables removed by summer 2020.
TREESCAPE planted in 2015

A friend of the Litchfield Garden Club made a sizable donation to be used for the treescape on Litchfield’s North and South Streets. 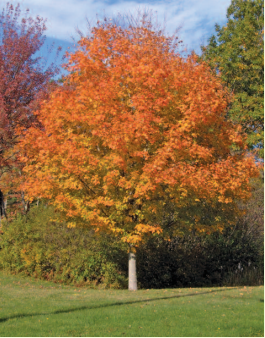 A History of The Litchfield Garden Club from its founding in 1913, the Litchfield Garden Club has had a history of planting trees and shrubs in our community. The first project, undertaken with the Village Improvement Society in 1914, was the planting of 50 shrubs and trees at the then important hub of town, the Shepaug Railroad Station. In the 1930’s and 40’s, when it was discovered that many of the beautiful elms gracing the main streets of Litchfield were falling victim to the Dutch Elm disease, club emphasis was placed on treating, preserving and replacing these trees.

In the 1960’s and 70’s, fund raisers were held for the club’s newly established Civic Fund. In 1970 an editorial printed in the Litchfield Enquirer stated, “Through this fund a continuing program of beautification of Litchfield is carried on, and in these days of steadily dying elms, every tree replacement by the club is a blessing.” In the 1960’s the club first replaced 11 of the 13 historic sycamores originally planted by Oliver Wolcott, Jr. in 1778 to honor the 13 colonies. In 1978 the Litchfield Garden Club funded a Town Action Plan for the Green, researched and prepared by Vision, Inc., a planning organization concerned with conserving and enhancing the visual environment. The plan called for the planting of 33 new trees on the Green in the center of Litchfield. The club, working with various Town boards and commissions, planted 11 trees on East Green in 1980 and on Arbor Day, 1981.
​
In 1988 the club won The Federated Garden Clubs of Connecticut’s “Civic Development Award” for tree planting on the Village Green, and in 1990 the National Council of State Garden Clubs recognized the club for the Action Plan. The tree planting tradition continued into the 1990’s when the Treescape for Litchfield project was launched.

A comprehensive master plan was compiled in 1997 by an experienced architectural/land use firm that included a blueprint for tree planting and guidelines for appropriate roadside amenities and development. In 1998 the Board of Selectman and the Planning and Zoning Commission accepted Treescape for Litchfield as a valuable resource and guide to preserving the rural and historic character of the Town. In 2002, the club was honored with National Garden Club’s “Roadside Beautification Award.” In 2005 the club undertook a project to landscape the new Municipal Parking Lot, donating and planting 83 trees and shrubs over a two-year period. Fifteen Rose of Sharon shrubs were planted along the Community Field tennis courts in 2010, bringing the total to 179 trees and shrubs and 21 species planted by The Litchfield Garden Club since 1995. Sycamore trees were planted in 2013 to celebrate the club’s Centennial Celebration.
The Litchfield Garden Club, Inc.  ~  PO Box 848  ~  Litchfield, CT 06759
email: litchfieldgclub@gmail.com